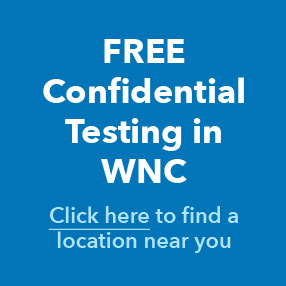 WNCAP supports efforts to reduce the rate of new HIV infections and improve the lives of those living with HIV and AIDS.

AIDSWatch is the nation’s largest annual constituent-based national HIV/AIDS advocacy event. AIDSWatch, organized by AIDS United, brings together hundreds of people living with HIV and their allies to meet with members of Congress and to educate them about the important issues at stake for people living with HIV in the United States.

HIV Speaks on Jones Street, organized by the North Carolina AIDS Action Network (NCAAN) is the annual HIV Advocacy Day for the North Carolina General Assembly. Advocates from the mountains to the coast gather in Raleigh to educate state lawmakers.

Last year, WNCAP brought three advocates to share their experience with state lawmakers and advocate for positive public policy in North Carolina. Read more about HIV Speaks on Jones Street 2018 here. This year, the event will take place on March 12, 2019.

Exercising your right to vote in local, state, and national elections is the easiest way you can take action. Voting ensures legislators elected into office protect the interests of people living with and affected by HIV and AIDS. We need legislators who support public policy that will help end the AIDS epidemic.

Other Ways to Take Action!

Sign up for our monthly newsletter to stay in touch with upcoming news and events.

Dine IN For Life on Thursday, April 29!

Dining Out For Life looks a little different this year. In collaboration with Asheville Independent Restaurants (AIR), WNCAP is encouraging the whole community to Dine IN For Life on Thursday, April 29! Dine IN For Life is simple: first, support our Participating Restaurants any way you can – takeout, dine-in, delivery, or gift card. Then, make a donation to WNCAP to help maintain our HIV prevention/care and harm reduction services.

We are so grateful to this kind and generous WNC community that has made our work possible since 1986!